January mortgage update: How long does it take to furnish your house?

Most Christmases I don’t tell DH what I want and he comes up with something thoughtful and often whimsical that he pays for out of his own allowance and not the family funds.  This Christmas I was feeling the pinch of the expectation of him leaving his job at the end of the year.  So deep down I wanted to repurpose some of his allowance for things we needed (that’s my selfish thought).  Also, there’s been something that’s been annoying me slightly for six+ years and mindful of our post on fixing minor annoyances, I figured that would make a great Christmas present from DH to me.

Several years ago we bought a house that has an open floor plan.  DH had visions of working in the kitchen while future children played in full view in the great room, or did their homework on the counter in the informal kitchen next to the sink.

For the first year we couldn’t afford furniture for the great room.  In the second year we didn’t have time to shop for any so we put our dining room set in the great room and made the dining room into a second or third playroom.  In the third year we realized that if we broke up our living room set from our old apartment back in graduate school, not only would it furnish both the living room and the great room, but I would also stop walking into the loveseat at night during nocturnal water missions.

In year one, after a few months of salary, we bought a w/d set.  We bought 6 bookcases on a close-out sale and a really cheap guest bed.  We saved up and bought a really nice Amish chair and a less nice glider (that I don’t use but the mother’s helpers love) and one of those Stokke Trip Traps and eventually a desk for the guest bedroom.  Year two we bought an Amish filing cabinet.  It is the prettiest thing in our house.  Year three we bought pictures for the walls.  Year four brought DH a new desk chair and DC got a desk.  Year five we got another two bookcases (which cost more than the original 6!) and a chest of drawers for DC2.

And now, for year six, we finally have bar stools.  Two of them.  So that the DCs can sit up at the counter while we’re in the kitchen and work on their homework.  Not that that’s ever going to happen because DC1 is training to work in the kitchen too and prefers doing homework on the living room floor, and DC2 had many years before sitting up on the bar stool is safe.  But you know, the dream is no longer an impossibility.

I think that’s it.  After 6 and a half years of living in this house, we finally have bought all the furniture that we think it needs.  Sure, DC2 may need a desk of hir own one of these days, and there’s always the possibility of buying more bookcases.  Some day my graduate school paste-board desk may finally fall apart.  And my MIL is slowly replacing our vertical blinds.  But for the most part, we’re set.

And it only took 6+ years of living here.

When folks move into a new place and go into credit card debt to furnish it… I don’t understand.  The place will get furnished eventually, and without taking on debt.  (And hey, for the couple that has to get/give Christmas presents but doesn’t know what to ask for each year… furnishing the house can provide years of ideas…)

How long did it take to furnish the place where you live?  Did you do it all at once or in drips and drabs?  Where did you get things?

We’re out of town.

We were in this week’s carnival of personal finance.

We always love when The Little Professor narrates her adventures.

Samuel L. Jackson and Anne Hathaway face off in the Christmas Movie Sad-Off.  Watch this video and laugh.  Not safe for work!

I want a steampunk room in my soon to be new/old fixer house. I humbly request another steampunk article specifically around home decor. I was thinking an office space or guest room to be steampunkalicious.

Oh, good, an excuse for a linkfest!  First: Offbeat Home on Steampunk.  Click around the vendor links and stuff.

An awesome house in San Francisco (seriously, click through you guys).

An Octopus chair from Maximo Riera:

Wouldn’t this be nice to hang in your room?

You need light, anyway.  Though I think this one is more fun:

If you’re doing an office, definitely think about doing a steampunk computer.  Mary Robinette Kowal has a tutorial…

Check out this desk made from an old organ: 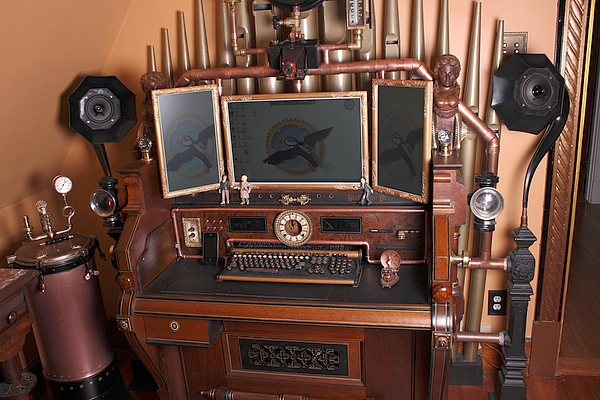 Or, this more modern desk is from a whole article about steampunk decor:

If you want a lighter look.

For the young at heart…

In any case, click around the pages linked.  Lots of cool stuff is on etsy.  Amazing art is on deviantart and other sites.  Fashion is the most fun; look at Clockwork Couture for inspiration.

I could go on forever, but I have to eat dinner now.

For my Christmas present from DC1, DH and DC1 made an mp3 that was full of awful awful puns (mostly penned by DH).  For the blog, and to keep you from the pain of all the Gnu Year wildebeast puns, I am transcribing just the part that DC1 wrote all by hirself with no help from DH (the transcription comes directly from the script– I have changed the names).  I think ze captures the essence of DC2’s personality perfectly, and DC1’s reactions to it.  (DC1 also voiced DC2 in the broadcast as DC2 is not actually talking much less reading.)

Gift Ideas for mommy
DH: I don’t now.
DC1: maybe a picture
DH: maybe one with decorations for Christmas
DC2: want want want play
DC1: maybe a decorated box for mommy on Christmas
DH: with fancy decorations
DC1: some food?
DH: I would love some
DC1: lets all eat some while [baby] drinks milk
DC2: milk!! yummy!!!
DC1: theres [baby]
DH: [baby] needs a diper change
DC1: okay Ill play some more,
DH: were done
DC1: its Christmas
Mommy: what do you have for me
DC1: [An mp3]
DH: let’s go!
(And what brilliant thing did DC1 get DH, you ask?  As of Dec 24th, when I’m writing this, I have no idea because I outsourced helping out on that to my sister this year.  Usually DC1 gets candy for DH.)
Posted in Uncategorized. Tags: christmas, kid. 4 Comments »

Here’s a picture, as requested, of the tree DC1 and DH made:

Here’s what we got for people:

DC1:  a prism, a cd, a Japanese balance hand game thingy, a gyroscope, some books, candy

DC2:  a few toys ze has never seen before to keep hir occupied in the car on our interminable drive up North.

BIL+SIL 1:  A bunch of Mexican spices from Penzey’s, including fancy dried chilis, and a Mexican cookbook.  (I totally had this awesome idea to do this with my new favorite Indian cookbook and Indian spices, but we called BIL up and asked if they liked Indian food and he said he didn’t know, they’d never had it.  Despite going to college in a town with a great Indian place!  Shame.)

Niece:  A Melissa and Doug stackable train that B&N recommended (and was highly rated) when we picked out the Castle Logix.

SIL + BIL 2:   A check for $100.  When we wrote it, they were in contract for a house, so this was going to be for unexpected homeownership expenses, but they backed out after failing to be able to negotiate with the owner after a bad inspection.  We decided to send the check anyway.  We’re also bringing a big bag of baby clothing as they are expecting.

Grandma-in-law:  A set of Dominoes inlaid with turquoise.

MIL:  $250 plane ticket because she’s helping us out

Father:  A bottle of applejack of the kind he admired when he was here last Christmas.

Mother:  A ticket to a play she wants to see and one for my sister to escort her.

Sister:  A bunch of books on career transitions (she hates her job), including YMoYL.

SPECIAL PROGRAMMING NOTE:  We’re both out of town partying (#1 says… partying? ha!  Try family and work obligations in the middle of cold snowy nowheres), so we might not comment much until January, but we’ve got posts queued up so you won’t be too lonely without us.  We’re counting on you to make sure the blog doesn’t die a sad miserable death while we’re MIA.  Stay safe, folks!  We’ll be back soon, and we promise we’ll read everything you’ve left us when we get a chance.  :)

With time and compounding these extra $500 tax-advantaged contributions will start to add up, especially if you’re married and it’s more like $1000.

All I want for Christmas is link love (and books)

Both of us dearly love this advice from Offbeat Home about How To Throw a Solstice Party.  Keep it in mind!

FeMomHist with an academic serenity prayer.

CNN talks about how big guns are supposed to make up for tiny penises.

Tiny Cat Pants points out that republicans need to make up their minds about teachers.

Funny about Money talks about how she deals with irregular pay.

Reach financial independence asks how much you spend on Christmas gifts.

A delightful find:  Ask Comrade Cockroach.  In this edition, he answers the age-old question:  Pirates or Ninjas?

So… exactly how *did* we get to this video from Carol of the Bells?