We got two amazing cats when we finally moved into an apartment that allowed them.  Little Kitty and Big Kitty.  We’d initially gone to get Little Kitty and decided she needed a companion.  Big Kitty was in her room at the shelter.  A big soft short-hair calico, mostly white with small black and ginger patches.  When we came in the room, she was sociable, gave us some love and pettings and then after a while went back to her little house area.  After checking out the other cats, we decided she was just right… loving and sociable but not too clingy.

Her sheet said she’d come from a house with too many cats and that she loved dogs and children.

The women at the animal shelter said she had a heart condition and they didn’t expect her to be adopted.  They hadn’t even listed her.  We’ll take her anyway, we said.

We gave her heart medication each day.  DH picked up her prescription refill today.

She was a beautifully behaved cat.  She didn’t go on counters (except when she thought we weren’t looking and then would jump down if seen), and never understood why we let Little Kitty jump on them.  She mainly just tolerated Little Kitty, but she also taught semi-feral Little Kitty how to do important cat things, like how to meow.

Big Kitty always wanted to be alpha cat, even though Little Kitty doesn’t understand social hierarchies.  Sometimes Little Kitty would accidentally become alpha, which was always funny because Little Kitty was about half the size of Big Kitty and really had no idea what was going on with the dominance games.

Big Kitty liked hard catfood a lot, and deferred to Little Kitty over who got first dibs on the soft food because that’s the one thing Little Kitty would defend, and it’s easier to keep your alpha status if you don’t have to fight for it.

Big Kitty’s short hair turned out to have a longer undercoat in the winter.  She was the softest kitty imaginable.  We had to make sure she had special catfood because she’d throw up most kinds of high quality food, but Little Kitty needed something high quality to keep her fur from getting dry.  We won’t have to buy Purina One Sensitive Systems anymore.  We also had to ration her food because otherwise she’d throw it up (and she’d get overweight).  After many experiments with water pistols and so on to try to keep her from waking us up wailing for food, we set up a catfood timer.  We’ll have to reset that for one cat, or just get rid of it since Little Kitty never overate anyway.  Or maybe Garage Cat will start sharing with Little Kitty now that Big Kitty is no longer keeping him in the guest bedroom.  I suppose we could move his stuff now.  These words seem so cold but my heart is breaking so hard every time I think about how things are going to change.

DH was her favorite.  Occasionally she’d try to take my side of the bed so she could be with him.  But she’d give it up grudgingly.

She was super cuddly with me when I got pregnant both times.  After DC1 was born and before we started cosleeping, we’d close the door because Big Kitty loved the Pack N Play and you don’t want to accidentally smother a baby.  Big Kitty would wail outside the door to be let in.  It was so much easier to sleep when we gave that up.

As advertised, she was great with children.  Wonderful with both babies.  She started swiping a bit at tail pulls and so on when DC1 got old enough to know better, but with DC2 she didn’t even mind those, especially since we’d give her hairball treats after each new indignity.

She was great at finding missing kittens when we misplaced them.  She’d guard and hiss, but was never actually mean to the four stray cats.  She used every one of the extra litter boxes.

She had her favorite spots in the house.  DC1’s bed, both on top and under.  The corner of my closet.  The armrest on the overstuffed chair.  She won’t be there anymore, even if traces of her soft white fur still remain.

At 4 something pm when DH was home, she started panting and meowing and her back legs didn’t work.  While I got the kids, DH called the vet and then another bigger vet and got her in the carrying case and took her to the hospital.  She’d had a stroke and was in a lot of pain.  A heparin shot would loosen that and she might survive, but given her heart condition, it was unlikely she would make it after her blood started flowing again and even if she did, she’d continue to have strokes.  DH had to make a decision and he couldn’t contact me because my phone was dead, so he called his mom.  Big Kitty was in pain and didn’t know what was going on and he petted her and said goodbye.  When I finally got home and called him I couldn’t understand what he was saying because he was crying so hard.

The vet has said many times that Big Kitty has lasted longer than any other cat she’s seen with this heart condition.  She wasn’t an old kitty, but she was middle aged.  Still spry, but not quite as much as she used to be.  Without the heart condition, she probably would have had many more years, but with the heart condition, we’re lucky we’ve had her this long.  They asked DH to donate her body to the state vet school because of it and DH decided to do that.  They’ll send us a cast of her paw in return.

It’s so hard to believe she won’t be around anymore.  She’s gone suddenly with only an hour or so of pain; she didn’t waste away.   If we didn’t have to change anything I could just pretend that she’s in a different hiding spot than where I’m looking.  I wouldn’t have to know that she’s gone.  She’s lived a good life and was a wonderful kitty.  We will miss her so much.

Good-bye, Big Kitty.  We will always love you. 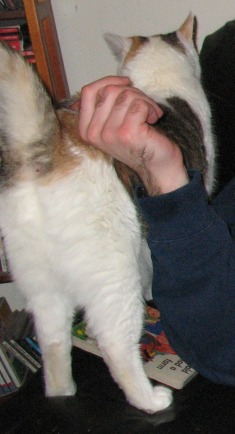 33 Responses to “In memorium”