The New Flooring (and bonus toilet) 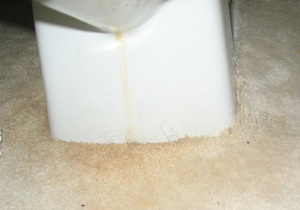 The vinyl is exactly as advertised.  It is not slippery and it is softer than tile.  If you can get over the dire warnings about off-gassing, sheet vinyl really is a good choice for a children’s bathroom where you care about safety a little bit more than you care about looks.  (The tile does look nicer in pictures than in reality because it’s just a picture of tile imposed on vinyl, but so long as you don’t look too closely, the illusion holds IRL too.)

Broken Mirror:  (DH didn’t take it down, and it shattered when the contractor accidentally bumped it.) $15 if we replace it before they get rid of all the back to school stuff.  More if we have to buy it regular price.

Bathtub sealer floor trim to place between floor and bathtub:  $4

DH says that they sent one guy out to do the entire thing and he really knew what he was doing.  He stripped out the carpet and cut off carpet tacks that were embedded in the cement.  Then he added a thin layer of cement to make everything even.  Then the vinyl went in, and went in almost perfectly.  (There’s a little area behind the toilet in the corner that will need some additional caulk or grout.)

They didn’t cut off the baseboards like we thought they would, and you can see we’re going to have to repaint those.  Whoops.  Quarter round would have looked really bad, so I’m glad we noticed that they were going to put it in standard and we asked them not to do that.  The guy did a really good job getting the flooring up right against the molding so all it needs is a little caulk here and there, particularly at the corners.

They were able to do the full jack and jill as one piece with no seams, which is pretty cool.

All in all, we think it looks really nice and was probably worth the month and a half wait (when they lost the flooring and had to reorder it and it was backordered etc.).  It was definitely worth the expense to have someone who knows what they’re doing doing this.  If we were doing it, we would most likely have done it piece meal with seams and we would have been completely surprised by things like carpet tacks.  I assume we’d know to put in cement because we’d have watched the appropriate youtube videos, but it’s really nice that we didn’t have to.

Do I wish we’d done this earlier?  It’s hard to say.  See, we didn’t have so much income earlier that $1,500 would have not have made us make some kind of sacrifice, most likely to savings and peace of mind.  In addition, it was probably best to get the bulk of the potty training done on that cruddy carpet that is now gone as well as in our ex-toilet. Essentially, we lived with the carpet without major problems in the past and appreciated having that money, but it sure is nice to have it looking respectable now, and $1500 doesn’t seem like much to have it the way it is now given that we didn’t have to do that much to get it that way.

Now we can let guests use this bathroom instead of hiding it from sight and sending them to the guest bathroom instead.  Two guests could even go potty at the same time (in separate bathrooms)!  If we ever had guests…

So, I still don’t understand people who renovate perfectly nice stuff with money they don’t have when they move into a house, but I do appreciate the need and ability to renovate responsibly when stuff is past its prime.  And I do realize we probably put these things off a bit too long, but so far I think that’s ok.

Next up:  Window treatments!

What makes you decide it’s time to renovate?  Do you do it yourself or hire out?

63 Responses to “The New Flooring (and bonus toilet)”