Making friends as a professor or as an adult

One of the problems with being a young untenured sort of person is that, outside of your department, the majority of people you meet your age are graduate students.  Graduate students have this unfortunate tendency to graduate and LEAVE.

You can be friends with colleagues, but you can’t tell them too much before tenure.  And sometimes if you get too close you realize they’re not only crazy but you have to work with them for potentially the next SIXTY YEARS.  So a little distance with most of them can be nice.

If you have kids, you will end up socializing a lot with parents of other kids, but a lot of times even though your kids may be able to discuss Minecraft for hours, you actually have little to nothing in common with them.  Of course, if you’re not extroverted, then having kids and kids having activities uses up all your people time and you’re just kind of stuck not really wanting to talk to anybody else.  (Hopefully you enjoy spending time with your family!)

If you live in a thriving metropolis, you can meet people with your interests online or through meet-ups.  Even in smaller towns you can be active in interest groups.  Maybe politics.  Maybe school board.  Maybe board-games.  If your hobbies and interests go more in the direction of watching bad tv and reading novels, that’s not going to work so well.  (Recall that book clubs seem like *work* to many academics.)

In the end, after my new friends left and graduated, and I found the right amount of closeness/distance with colleagues, and I split children’s activities with DH, most of my new friends are conference buddies.  I see and socialize with people I like and enjoy talking with (small-talk even!) a few times a year.  Sometimes we email in between, sometimes we don’t.  Sometimes we miss each other for a year or two or three, sometimes we see each other several months in a row.  Sometimes we make time to have meals, sometimes we just chat at 10 min breaks.  It’s odd having closer friends that I travel and see than I have in my own home town, but I bet I’m not alone in this.

Have you made friends as an adult?  How have you gone about it?  Do you wish you had more or are you happy with what you have?

Posted in Uncategorized. Tags: conundrum, debatable, quality of life, that's what friends are for. 49 Comments »

I dunno, man, it sounds kinda militaristic.  But yet!  AR Books!  So on-point!

Angry Robot Books publishes an extremely good-ass library of books. They have one of the highest hit-rates for me of books they publish that I read and own.  (#2 not so much.  #2 craves light and fluffy.  #2 does like Matthew Hughes though.  But he’s the only author on their list she is both familiar with and enjoys reading.  There’s no denying that, for example, Lauren Beukes is quality, but bad things happen to people in her books.)

They also publicize in areas that I see, and that helps.  Their ebooks are DRM-free.

The unusual thing for me is that I very rarely pay attention to which publishers are putting out which books.  Authors, yes; publishers, almost never (sometimes if it’s Subterranean Press).

I seem to be squarely in Angry Robot’s target audience, and they seem to be reaching me pretty well.

I like their books but I wish there weren’t an “army”.

Books of theirs that we have liked and/or found interesting and/or have read and/or own:

And more are on my wish-list, too!

There was a brief panic that a 2 of their imprints (which I’ve never heard of) are closing, but not the whole press.  Honestly I didn’t know they HAD imprints until I saw that post.  Their press release said, “The core Angry Robot imprint is robust, however, and we plan to increase our output from 2 books a month, to 3.”

Grumpeteers, have you read any Angry Robot books?

DH just got back from his second business week-long trip this month.  It was an important trip and really clarified some things for both of us.  I was considering turning this into my annual anniversary post, but I’ve already written one with a little bit more me-centered-ness.

With his new job that he’s been working at for well over a year, he works on teams.  He gets regular (weekly) feedback.  He’s producing something valuable that will be literally saving lives within the next two years, should all go well.  (Engineering ROCKS.)  He’s doing computer programming, but not just programming, and he’s managing a project and a programmer.  He’s written as many successful grants in the past year than he did during his entire time as a professor.  Telecommuting and a bigger salary also haven’t hurt.

DH is happier than he has ever been before.  And I’m so very proud of him.  He is truly amazing.  Talking to him on the phone after a particularly successful meeting I felt my uterus twinge and had to remind it that I have already reproduced (twice) with this amazing man.

I feel a little bit guilty that he wasted all those years teaching undergraduates who didn’t realize the value they were squandering by not paying attention to their studies.  Truly we should have been less risk-averse and maybe he should have left academia earlier.  But things have worked out.  Being able to live together has definitely been a bonus and it isn’t clear that he would have been able to find such a great job 10 years ago.  Spouses of some of my colleagues haven’t been so lucky and either house-husband or live apart.  It’s hard to say what the counterfactual would have been.

Academia is still working well for me, but leaving academia is working extremely well for DH.  We are truly blessed.

April makes people in academia lose their brains for busyness.  In this week’s Fc*k the police… 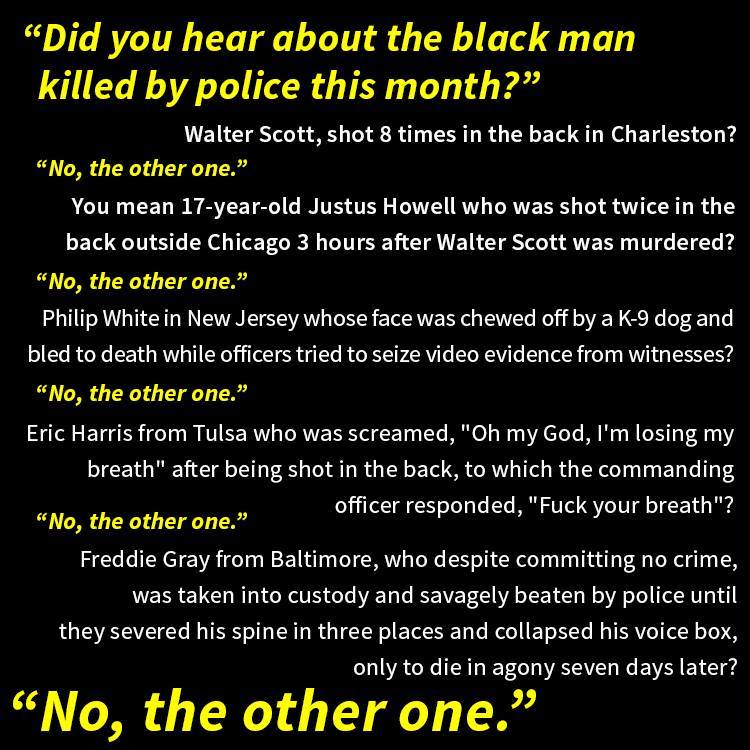 Black cyclists in trouble with the po-po.

Myths about women in science.  @femfreq is pretty cool!

Tiny elephant tries to find the rest of a human’s nose.

gamergate is still a thing (aka, what was that whole anne wheaton thing about)

Are you receiving a marriage penalty or bonus?

anxiety and parenting a gifted child

wish I could have seen this

Posted in Uncategorized. Tags: link love, this is why we are feminists. 1 Comment »

Q:  how can a civil engineer wife help with regarding the partner’s career?

Q:  being a teacher what should she behave or follow

A:  probably not this: 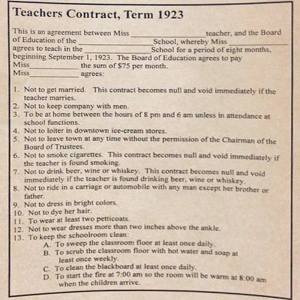 Q:  what would authoritarian parent do if their child asked them if they can sleep over a friends house

A:  once again, do your own homework

Q:  who is accounting professor?

Q:  why are professors so grumpy

A:  Systematic undermining of our livelihood

Q:  what does it mean when someone challenges you to a brewsters millions

A:  we have No Idea.  Sorry.  That’s not true… we have a post on it, but it’s seriously unlikely that anybody is going to tell you that you get a ginormous amount of money if you’re able to spend a big amount of money in a short amount of time.  Most likely it’s a scam.

A:  it’s polite to help your partner out first.  Better to give than to receive and all that.

Q:  what do university lecturers do in the summer

A:  Teach summer classes.  Sleep.  Struggle to pay the bills.  Research.  Write all those papers.

Q:  why do narcissists love misery

Q:  what is the average salary of a cpa with a doctorate

A:  You’re looking for this page , or else the side-bar on this one (Hint:  Pretty high)

School districts, housing, and having a grade-skipped kid

So, DC1 is grade-skipped by two grades.  Ze is in a private school.

That means that we have no idea what grade ze is going to be in next year when ze goes to public school in a new state.

Which means we’ve been calling around a lot.

And getting a bizarre range of answers about how schools would determine grade level for DC1 in our situation.  How big a range?

1.  DC1 starts in 3rd grade, period.  Then the teacher observes for 6 weeks.  Then a team including the principal discusses the situation and most likely keeps DC1 in 3rd grade, even though ze would be the oldest non-red-shirted kid in the grade.

3.  The administration would assess DC1 to determine what would be appropriate.  If ze is ready for 5th grade, that is where ze would go.  In additional to educational components, they will assess emotional and social components.  Writing it out this way makes it sound a lot nicer than how they sounded over the phone, which hit both DH and me with a lot of bad memories about our childhood, with the emphasis on emotional/social.  (Because if you’re out of synch with your same-age peers, you’re failing at emotional/social which means they won’t let you skip… Catch-22.) (#2 is still mad about people not letting me skip a grade for social reasons… guess what, I didn’t have friends in school ANYWAY so at least I could have learned something… grumble.)  (#1 would have had friends if she’d been grade skipped.)

4.  Need to take educational documentation including letter from teacher/principal and report card.  The documentation will be reviewed by school administration.

5.  Based on age it would be 4th grade (different cut-off date?), but school records indicating completion of 4th grade would allow DC1 to be placed in 5th.

6.  Ze would be placed in 5th grade automatically.

7.  Ze would be placed in 5th grade and then given a placement test for homogeneous math grouping placement.  Bring materials to help teacher/administration work with DC1.  Would need special reasons to be placed in a grade below 5th.  (“Is it because you’re calling from the South [and worried that a blue state education would be too advanced]?” the confused administrator asked.)

8.  Skip approved with proof of why skipped for special reasons.

So we’re narrowing down our search to #4-8, mainly because #3 gave off such negative vibes.  #7 sounds great, but has very few, if any, houses, mostly apartments and the apartments are interspersed with undergraduate housing.  So we might look out there, but not until we get closer.  #6 is a substantial commute for me and very suburban… not unlike where we live now.  #5 has fifth grade in middle school, not elementary school like all the other districts in the area.  #4 is a pretty good bet in terms of houses, commute times, and walkability, but I’m a bit nervous about where they would really place DC1.  Still, they have some really nice (not cheap!) houses and the commute is great.

I guess the moral is that different places do things widely differently, sometimes even in a smallish geographic area?