Adventures in cleaning out the dryer vent

One of the things you might do around the house while working from home these next few weeks is home repair.  But be careful that you don’t get injured!  Now is not a great time to have to go to the emergency room!

We had been noticing that our dryer was taking longer and longer to get things dry.  DH thought maybe our lint tube thingy was clogged again. 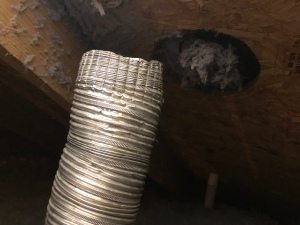 So he vacuumed all the lint areas in the dryer and then bought a snake from home depot and snaked as far as he could snake.  And some stuff came out.  But that just made things worse– he managed to complete clog the tube so no air would come out.

Unfortunately instead of doing something sensible like venting out to the side into our driveway, our dryer vent takes a long tortuous path up and sideways and up to vent in the roof.  That results in a weird little built-out above the cabinets in our utility room.  DH had to take that apart to get to the vent.  Afterwards he had to close it up and paint over it again, but the only picture I have of that has too much of him in it to be anonymous (though you might just think I’m living with a celebrity since he does have a famous look-a-like). 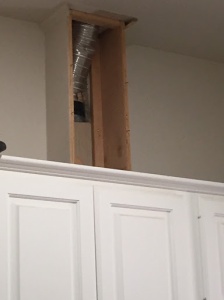 How stupid is this when the driveway is like right there to the right?

Sadly, even after taking this part apart, air still wasn’t going through. Nothing was working. So we did two things.  First, we took the dryer completely apart.  It was clogged and disgusting.  I don’t think this picture fully captures the cloggedness– this is like 70% packed hard dryer lint by volume.  It took effort to pull it all out.

A grocery bag full of lint from the dryer.

Then, nothing worked to unclog the tube.  DH tried some dumb stuff like taping a box fan in a garbage bag to it (I’m like that does not seem like it could possibly be powerful enough to do anything, but hey, you’re the engineer) and started worrying he’d created a dangerous fire hazard while I determined that if you want someone to fix this for you, you need to hire a chimney sweep company (some plumbers will do it too, but it’s mainly a chimney sweep thing), but none of the sweep companies in a 90 mile radius online serviced our county.  I left a message for one (this being a Sunday when DH tried it), but by the time they called back the next week we’d already solved the problem ourselves.

So… the second thing we tried, the one that solved the problem was buying an electric leaf blower.  Now, I HATE leaf blowers with a fiery passion and we continuously remind our lawn service that we don’t want the sidewalks blown (at least they asked this year instead of just “forgetting”).  But… we needed the clog fixed before something sparked a fire and we had loads of laundry to do!  And an electric leaf blower was probably going to be less expensive than hiring someone from the nearest city and paying time for driving out here.  (Why electric:  because we don’t want a gas motor running inside the house, the same reason we had to run a generator outside the house that time DH forgot to get our electricity turned back on over 4th of July weekend.)  Buying the leafblower was just a little more expensive than renting and saved a trip back to home depot.  It is now in our shed for the next time we need to unclog something.

The electric leaf blower was impressive.  It looked like it was snowing.  Worked like a charm in only a few minutes.

After the bulk had floated down and been captured for disposal. Some still remains on the roof. 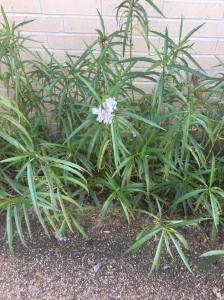 Lint snow on our plants. In our driveway. Where it the vent could have just, you know, vented.

Though this whole debacle did add a lot of dust to the house and DC2 and I both got hives and had to take Zyrtec until DH and DC1 vacuumed/wiped everything down.  Perhaps we should have taken the dryer apart outside and started with the electric leaf blower.

Disclaimer:  If you try this at home, please read up a lot on how best to do it and for goodness sakes, do not do anything that could get you injured.  At least not until the covid-19 vaccine is available (12-18 months from now…) and you’ve gotten it.

15 Responses to “Adventures in cleaning out the dryer vent”