Our 25 year old garage door opener remotes suddenly stopped working when trying to close the door.  They still work with garage door opening, which is good, but not closing.  Every once and a while it will allow a close, but mostly not at all.  Otherwise it works fine, and the base garage door button works to open and close all the time.

So we looked online and Google (or in DH’s case, Duck Duck Go) was like, you can do this yourself, but do you really want to?  Google said, expect to pay something like $250 for parts for a top of the line opener and $250 for labor.  More if you want to change out the springs and rollers.

So we brought someone out for an estimate.  He said $1K.  Less for a cheaper opener (so, $850 for a $150 opener).  More if we want to replace the entire system.  (He also said probably the reason we’re having the problem we’re having is someone in our neighborhood got a fancy new electronic gadget that interferes with our signals, which isn’t really fixable– you just have to replace the entire thing).

$1K is definitely over-charging.  There is another place in town with no reviews but DH decided rather than call them out, he’d just make this a fun labor day weekend bonding experience with DC1.

So he ordered a new garage door opener from Home Depot (not sponsored) and picked it up curbside.  After some contemplation he decided he wanted an opener that is quieter and opens faster even if it requires annual maintenance (I would not have made this choice– I would have gone with doesn’t require me to do anything even if it’s slow and loud).  Apparently he got a screw drive, which is the quickest of three types and quieter than the chain (the belt drive is quietist):  chain, belt drive, and screw drive.  He also says he likes screw drives because they’re used in his 3d printer and in robots and although he is not technically a mechanical engineer, he sometimes has played one professionally and in graduate school and he appreciates the technology.  Appreciating the technology drives a lot of our big purchases in Casa Grumpy.  (I would have picked the chain because we’ve got a chain and it seems pretty durable.)  Total cost:  $235.

When he started taking the old opener down, he realized that the builder made a mistake in terms of reinforcement in the middle of the garage door– they misjudged where the middle was, so the studs/joint were too far to the left.  The previous garage door installer just bolted it into the left side and left the right side completely unbolted.  So DH added another piece of wood with wood glue and a bracket (there are physics involved).  He plans to reinforce later.

There were a number of other problems.  Bolts that were put in super tight.  Wires that were too short that he had to extend (he soldered one and capped the rest).  The new opener is a different size so the brackets had to be swapped out and moved. He forgot a screw after putting it in and had to take it out and put it back in again. 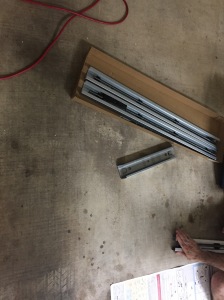 All told it took about 7 hours.  DC1 helped off and on, which should be a good learning experience(?)  And now we have a working garage door opener!

DH is thinking about changing out the rollers but not the springs later.  Rollers would be like $25.  We’ll see if it happens.

The new opener is definitely faster than the old one.  DH says it isn’t as loud, but it seems plenty loud to me.

Have you ever had to replace a garage door opener?  Did you pay someone or do it yourself?