No, I’m not trying to horn in on the shu box.  As you can see, there is nothing neat, beautiful, or inspirational about my planner layouts!  (Except my beautiful pens, of course.)

But I’ve been trying some new things with planning this year because I’m just too scattered with too many things going on.  And yet, I have the luxury of having just one work-space rather than having to transport things back and forth.

To start with, I have my Moleskine calendar which I have had every year since my professional organization stopped providing them free.  I use this just for due dates and actual appointments.  I picked a somewhat light week appointment-wise because I was able to strategically place my beautiful EnerGel Clenas over potentially identifying names, which I cannot do every week. 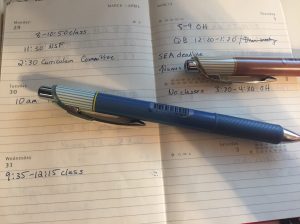 I actually ran out of ink in my main Clena and had to refill it because I love this pen so much. It’s .4 blue/black. The brown is also .4 and has brown ink. It’s even prettier with the sticker removed, which I did eventually.

The new thing is that instead of having sheets of half paper scattered all over my office with to-do lists and daily schedules and full sheets and notepads with project info… I’ve moved most of my projects to Trello or Github (which both have benefits and drawbacks), and I’ve taken over one of DH’s unused Moleskine lab notebooks (he prefers lined or dot grid– I had been trying to buy a blank black hardback one for ages but they’d been sold out and finally he remembered he had one he wasn’t using) to replace the scattered paper. 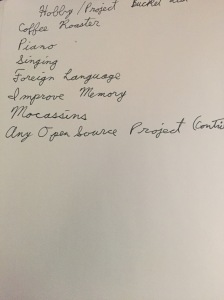 The one page that DH used in this book before he decided he prefers Leuchtturm1917 with lines or dot grids over unlined Moleskine. He has since completed the coffee roaster (it has been years since he last used it) and has made 3 Moccasins (not 3 pairs, 3 individual slippers). He also has started occasionally taking B-complex for the memory and it seems to help? I guess DC2 has kind of been teaching him Spanish? He has definitely not worked on singing.

So basically here’s what I have been doing with the Moleskine.  I keep the left side, which you can’t see, blank and use it for notes from meetings.  (I would have to redact the heck out of them, so I just didn’t take a picture.)  On the right hand side, I plot out the week on an hourly basis.  The one thing I wish I didn’t have to do is write out the times.  Writing them out I am able to take up less space than I would if I could find a washi tape I liked or bought a pre-made planner, but I think I will make that trade-off now that I know more about what I like in planners.  Then I fill in items from my weekly calendar like class-times and meetings.  I put little brown stars next to them to indicate they are things where I have to either be somewhere or I have to get on some kind of call– basically I have to actually do those things at that time.  The rest of the hours I fill out with what I hope to be doing with the rest of the time.  Usually I’m pretty good about sticking to the schedule in the morning, but in the afternoons I kind of lose steam and get better at convincing myself to do something else.  I try to build in a little slack if I can. 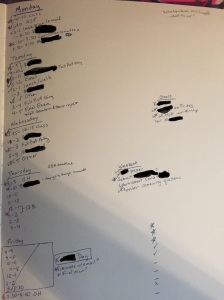 In all its glory. (Post-it notes removed.)

A new thing for me is listing my main goals for the week.  What are the two research projects I hope to make the most progress on?  What are the stupid little service or teaching assignments that have to get done?  Weekend usually gets written on Thursday or Friday when I realize that I didn’t get as much done as I needed to and I’d rather be super lazy near the end of the week than I would not work at all on the weekend.  Though… to be honest the weekend stuff is generally aspirational too unless there’s a real deadline and often gets pushed off to the next Monday or Tuesday (*guilt*).  But I never seem to get done what I need to get done if I just write down what needs to get done– I have to write down more than I need to do to trick myself to do what I actually have to do, if that makes sense.  I blame my Catholic upbringing.  #raisedCatholic #guilt  I could actually do everything I put in my list, so it’s not actually unrealistic.  I just … don’t.  And this is one reason why I’m not at a better school, but I do ok still.  (It doesn’t help that there are more people in my life encouraging me to work less “take a break” “can’t work all the time” etc. than there are encouraging me to get stuff done because they have an inflated idea of my actual productivity, not realizing how much of my time on the computer is actually surfing the internet.)  (That was a digression.  But no, spending less time at the computer does not actually make me more productive in the hours I spend at it.  Been there, done that.  I hedonically adapt pretty rapidly and end up maaaybe doing an hour of work and then get hit with deadlines and regret.)

That Friday was a great day because a coauthor who had been not doing much (she’d been meaning to, but life would happen) and I threw the paper back and forth at each other every hour and we made a huge amount of progress on it.  So it looks blank, but was actually me doing straight up writing every other hour and either dealing with email or checking on citations/figures/etc. on my off hours.  Flow is the best.

That little line of stars and dashes used to be next to a post-it note listing all of my current projects on it.  The stars mean “work on this project this week”.  The dashes mean “you could work on this project this week if for some reason you couldn’t work on another one”.  The x means that there’s nothing I can currently do on this project (in this case, it’s in a student’s hands right now and I’m like 4th author and it’s about machine learning so…).  The checkmarks mean that I submitted that project or passed it off to a coauthor and don’t need to do anything with it until it comes back.  Usually I only have 2 projects I’m actively working on, 1 under review, and 1 in the data collection/lit review/RA doing stuff stage, possibly also one at the grant proposal stage.  But right now is messed up because I’m doing a ton of little papers with students because of that NSF item you see listed and some other grants from other agencies that want things, plus they help students get things on their cvs which is nice.

Another new thing I have that you can’t see is a growing to-do list post-it that is currently residing on the left side of the paper.  It has a list of all my upcoming deadlines which appear to be mostly referee reports and editing, though there’s currently also some end of the semester teaching stuff.  I like the post-it notes because you don’t have to rewrite them and you can move them week to week.  I am on my second “projects” post-it though because some stuff is off my plate for now and I have a couple of new things on it.

Sometime this summer when they come out, I have decided that I want to get an Academic Year Passion Planner to replace both Moleskines.  It combines an hourly layout with a weekly spread with lots of additional *space* for all these other extras.  I’m hoping that up at the top I’ll be able to put deadlines for each day like with my small weekly calendar.  The spaces at the sides and bottom will fit my post-it note to-do lists, goals, and weekend hopes.  The blank pages can be used for notes from meetings.  I will likely ignore every single passion aspect.  If it doesn’t work out, then I will go back to this method in time for me to get the 2022 Moleskine calendar for Christmas or maybe I’ll know more about my likes and dislikes to try a different planner layout.

How do you deal with planning?  Do you have a planner or calendar system?  What do you use?  What works or doesn’t work for you?