In which we buy a car and #1 discovers some confusing truths about herself: Also, what happens when buying a car is a repeated game

The Thursday before last I was convinced that I wanted to buy another Hyundai Accent, SEL (that’s the second tier) trim (because I like having a USB charger in DH’s car and there’s not much difference between adding that for $70 to the base trim and just getting the next level of trim.  I like packages.)

So on Thursday we drove over to the Hyundai dealership ready to test-drive a new model Accent and also the Ioniq.  And we walked into a big empty show-room and eventually the one guy there sitting at his desk noticed us.  And wanted us to sit down and talk.  After some discussion about how no we didn’t have a lot of time and no we didn’t want to make an appointment for later, we just wanted to do a test-drive, we left saying we’d have to go to a Hyundai dealership in the city that weekend instead.  And then we stopped at the Honda dealership because it was on our way home and I wanted to try the Fit.

The Honda dealership has a super bumpy road right next to it and I could feel every single bump with the Fit.  Of course, I can feel every bump with the Accent too and that doesn’t really bother me.  But the Accent is a 15 year old car that I am attached to and the Fit is some new bumpy plastic thing I had never met before.  So then I test-drove a Civic with the lowest level trim and it was much smoother though by no means smooth, but it was more of something that I could live with.  But I wasn’t in love or anything.  So we went home.

This experience immediately triggered internal angst.  Who am I if I care about a smooth ride and fancy features?  What has happened with the person who was happy so long as there were four doors and air conditioning and reasonable safety/reliability ratings (and I didn’t have to drive stick, which I hate)?  Was there any point in trying a new Accent, or would it cause me disappointment too?  Have I become a luxury-seeker?  Will I be super unhappy the next time I have a rental Toyota Corolla?  Did the Clarity spoil me or is it some internal change as we’ve become more well-off than I could ever have dreamed of as a child?

After some research that evening I decided we should try Kia next, both their Forte (equivalent to the Accent) and their Niro (a sub-compact SUV hybrid).  This salesman also wanted to talk with us, but we were more firm about just wanting to test-drive and he was more agreeable to that (and DH didn’t make the mistake of politely sitting down).  The Forte was immediately checked off our list because I don’t have enough hand strength to release the emergency break when it’s fully up.  But at the salesman’s urging I took it for a (way too long) drive anyway.  It was a bumpy ride and I had trouble with the stick gears (not a manual, but they do drive/reverse/etc. with a stick) because the labels next to the stick didn’t really match up to where the stick was– you had to know that you were in the 4th place rather than the 5th because all of the labels were condensed to where the first couple hit.  (The Niro had the same problem, but it had little lights to indicate which gear you were in, which was helpful.)   The Niro had the same acceleration problem that Wandsci noted in the Ioniq in this post, which, she notes, shouldn’t be a surprise because the Niro and the Ioniq share the same hybrid drive.  So we thanked the salesperson and left.  For those interested, I also thought the KIA’s backing up guidance was a bit confusing– it provides more information than the Civic’s with 3 boxes instead of 1, but you’d have to know which box to focus on.

In my research that night, I had also learned about the existence of the new Honda Insight, which is essentially a super nice Honda Civic Hybrid– pretty similar to the first Honda we bought back when they still had a Civic Hybrid model, but the 2019 version.  So after striking out with KIAs, we went back to Honda (because… it was on our way home) and just missed the guy from Thursday (who was showing a family a minivan), but his replacement was similarly useful and took us to test drive an Insight, after remarking that it doesn’t make sense to talk about trim until you’ve actually tried the car.  The drive was slightly smoother than the Civic and not quite as smooth as the Clarity (the Clarity is a really really nice car!  But also not cheap.)  They had a lot of the mid-trim (EX) and only one low-level trim (LX), but after a short drive in the EX we tried the LX.  The LX doesn’t have the right-side camera (neither did the KIAs we tried) and the video screen was too small (the EX model is still smaller than the big one on the Clarity, but was big enough that I didn’t feel like I was looking at a cellphone).  So… I decided I liked the mid-level trim on the Insight.  And that I liked this car enough that I could buy one.

But we wanted to do due diligence and check the Hyundai dealership again, so we decided to ask for a walk-away price and check out Hyundai the next day (“Can we leave DC2 age 7 with DC1 age 12.5 as babysitter?  The internet seems to think so…”) .  It took quite a bit of discussion for Honda to give us a price (the salesperson called in the manager to talk to us), and they kept trying to find us in their system but could only find our purchase of a 2007 Civic Hybrid.  Eventually they realized they needed to look under DH’s name, not mine.  And then… they were a little bit less than enthusiastic but came up with a number.  Before showing us the number, the manager spent some time asking roundaboutly how, as repeat customers, they could get us to shop around less.  And I point blank asked … you want to know what you can do to have us give you two thousand more dollars?  And he said something about needing to make a profit, and I asked if we’d really gotten that close with the Clarity because I hadn’t thought we had.  But then he showed us the number… walkaway price of $24,772,89, which is actually a pretty good price for an EX trim already ($22,955 before taxes and fees required by our state are factored in).  I think shopping around we could get maybe $500 shaved off of that, and I told DH that if he wanted to do the shopping this time that he could have the difference added to his allowance, but he didn’t think it was worth it.  Moral:  If you bargain hard with a dealership, they keep notes and offer you a lower number the next time around so as not to waste time.  I’m hoping that us accepting their offer instead of trying to squeeze out that last few hundred dollars doesn’t backfire on us, but I’m also hoping we won’t need new cars for another decade or two.

That evening we did a bunch more research and the next morning we were feeling less like leaving DC2 home alone with DC1 in order to test drive the Accent which was likely to be a disappointment as reviews compared its shocks with the Fit and the Forte which I didn’t like, and we found out about how the Ioniq had a similar acceleration experience to the Niro.  Also the Insight gets better mileage in practice than they list (except in high altitudes) and the Niro gets worse.  So… there just wasn’t much point.  We called the dealership to let them know, but since I didn’t actually want to get the car until Tuesday when my Accent would be taken to the shop to get the gas tank fixed (juggling 3 cars with a 1 car driveway in a HOA that doesn’t allow sidewalk parking at night is a huge PITA), we had to wait to buy it until then.

We might have ended up with another Accent if the guy had just let us test-drive one that Thursday.  I don’t know.  But after trying the Civic and the Insight, it just wasn’t going to happen anymore.  I was willing to pay $5K more for a much nicer car from a much better dealership.  I am having a hard time reconciling this with my view of myself.  I mean, it’s not quite mid-life crisis levels of sports car, but it is a big shift from how things have always been for me.  I … think I may like having nice things sometimes.  For myself, even, not just for DH.  And not just because they’re going to be better for my health or last longer… I suspect a new Accent would last another 15 years for me.  The Insight hasn’t been around long enough to know about its reliability ratings, so it might not last as long.  I’m not sure how to feel about this new discovery about my taste for a bit of luxury over strict needs. 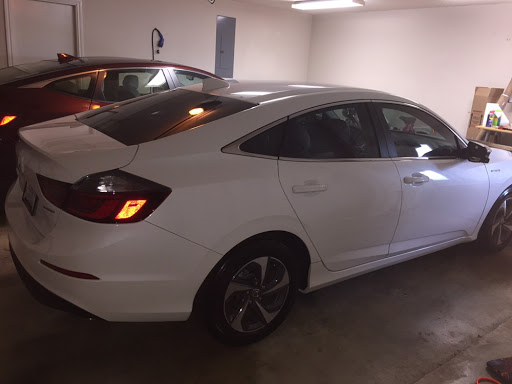 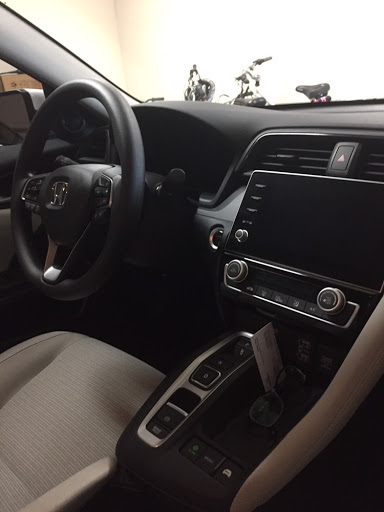 This car has knobs!

So far I’ve been driving it a few days to work and back and I haven’t gone down a single bar in fuel– there’s well over 400 miles left to go before I will need to fill the tank up again. Everything about it has just been lovely.  It has just been a great drive.  It is a little loud compared to the Clarity on acceleration, but very quiet compared to the Accent.   It’s only a little longer than the new model Accent I sometimes park next to and handles well in the way I like smaller cars to handle.  It’s not quite as brazen with the safety warnings as the Clarity is– preference for that could go either way, I think.  If you’re looking for a hybrid in the Prius range, I would strongly recommend giving this one a test drive.  If you live in a state with a cleaner energy mix and you’d like (and can afford) a bigger car, the Clarity Plug-in is delightful and a more pleasant drive we think than the Ioniq or Niro–I’ve even gotten used to the faux wood paneling inside.  Now, I can’t compare these cars to BMWs and Teslas and Mercedes and so on, but for the mid-level hybrid and hybrid+ market, we really do like these the best of the competition.  As a disclaimer, I just don’t like the new model Prius as a passenger and my tall DH was physically uncomfortable in the Prius Prime, but Toyota does have some options that a lot of people think are comparable to or better than either the Insight (Prius) or the Clarity (Prius Prime).

I do like this feeling of rightness I have about the purchase.  Before test-driving it there wasn’t an obvious choice, but after test-driving, nothing else compared in the non-luxury small car market.  I think I would have come to appreciate a new Accent as I got used to it, but the Insight makes me happy just driving it.

What do you look for in a car?  Have you had repeat experiences with same dealership?  Have your tastes for nice things changed over time?

Posted in Uncategorized. Tags: car, in which we do buy a new car, money. 34 Comments »